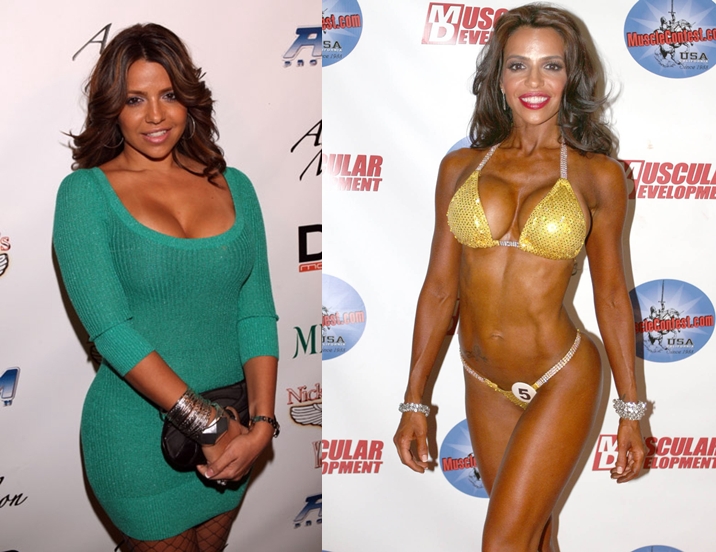 Cuban-born American model and fitness icon, Vida Guerra shot into limelight after posing in the December 2002 edition of FHM (For Him) magazine, and since then, she has continued to be one of the most admired women in the beauty and fitness industries till date.

The 5 foot 3, 42-year old, brown-eyed beauty is famous for maintaining a lean and toned but still sexy and curvy body. A difficult combination, no doubt, that requires work and consistency.

Here’s Vida Guerra’s diet plan and the workout routine that has helped her maintain that body over the years, to the envy of women even decades younger than she is.

Vida is a portion control advocate. In an interview with AskMen, she said she doesn’t diet instead she eats whatever she wants and does that about four to six times a day, but in smaller portions, which helps speeds up metabolism.

Vida Guerra’s daily food intake comprises 4 to 6 “mini meals” made up of lean proteins, vegetables, fruits and lots of water. This diet is designed to maintain a stable blood sugar level within the normal range and ensuring her energy levels are adequate for daily activities. This kind of diet is known for reducing hunger pangs and sugar cravings at the same time. Her favorite meal for getting lean quickly is mixing oatmeal and protein shake together and her once-in-a-while cheat meal is Cuban food, specifically rice and beans.

Vida is a publicly acclaimed vegetarian and supporter of various animal protection causes and in 2011, she appeared nude in a fund raising campaign for PETA, in support of vegetarianism. She credits her vegetarian diet for her sustained good health and clear skin.

In addition to a healthy diet, Vida Guerra’s diet plan includes her brand name supplements called VidaForce. It was introduced into the market as a pre-workout energy booster with fat burning properties. Vida Force supplements are available for men and women and come in Blasting Berry, Coffee Lover, Lemonade flavor and Mango Peach. Other products include daily vitamins called Vidamins, and VidaTrim. VidaTrim is a gentle detox cleanser and waist trimmer.

Vida Guerra is particularly famous for her curvy and toned backside and she has won the FHM’s “Best Butt Award” in the past.

She started working out a young age and was active in ballet, karate and baseball since she was 8 years old. Though she gained and lost 20 pounds at some point, she felt her body was too soft and so decided to get into targeted training routines. She started active bodybuilding at the age of 19 to get the desired firmness while keeping her curves.

Though she does full body workouts, her favorite body part to train is her legs, hamstrings and butt as she believe those are the sexiest parts of a woman and also the hardest areas to sculpt. Some of her favorite exercise routines includes dead lifts, light presses and jump squat exercises, to tighten and tone her back side. She also incorporates moves that are known to tighten and tone up the mid-section and abs more effectively than crunches or other abdomen focused workouts. Also, these kind of exercises burn more calories while increasing metabolism. Apparently, the exercises pay off as she says she gets the most compliments on her backside than any other body part.

She exercises at least three times per week at the gym. In the same interview with AskMen, she said she tries to work out a minimum of three times a week and she makes sure she drinks a lot of water.

On a typical exercise day, Vida Guerra does 1 hour of cardio exercises before heading to the gym for another 2 hours of training including her favorite squats. She has also incorporated a special kind of Pilates exercise created by Ky Evans, called KyLates, into her routine. She claims it’s extremely difficult but works her out thoroughly.

Her sensible food and fitness pattern appears to be working for her as she keeps looking great. Vida doesn’t starve herself nor exercise obsessively. Instead, she focuses on specific moves that sculpt her body to become just the way she wants it.